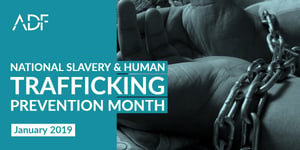 ADF has been committed to helping law enforcement end human trafficking and child exploitation since our founding in 2006 and the launch of our industry leading digital forensic triage software which enables law enforcement to quickly and easily collect, analyze and report on digital evidence.  ADF's founders, J.J. Wallia and Raphael Bousquet, coined the term triage as it relates to digital forensics because of the need for speed in identifying victims and suspects in criminal investigations.

ADF supports 10,000+ investigators and forward operators around the globe making it easy for them to quickly collect, analyze and report on digital evidence -- a critical element in the fight against slavery, human trafficking and child exploitation. We offer specialized digital forensic search profiles designed to investigate Human Trafficking. Learn more and request to receive access to ADF's Anti-Human Trafficking Search Profiles.