Learn how to conduct an initial investigation quickly based on its scope using digital forensic triage. 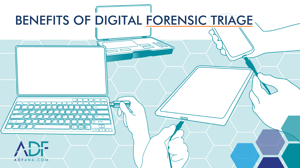 The benefits of triage? Just think; if 90% of cases can be solved with 10% of the data, you have an opportunity to quickly identify and protect victims, determine suspects, and even solve your case early. Learn how triage allows you to prioritize evidence, make decisions on the need for a further deep dive into the data, or just to gain peace of mind, based on the facts.

ADF empowers front-line field investigators and lab examiners to investigate on-scene or in the lab to quickly preview evidence on-scene, seize the appropriate devices, take a suspect into custody, identify any and all victims and prioritize devices in the lab. ADF investigation tools include: 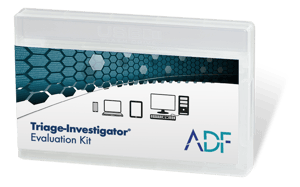 Request Your Free 30-Day Trial of Triage-Investigator® software and you'll receive free support from our digital forensics team so you can start solving your investigations with ADF's rapid, intelligent digital forensic software.

Triage-Investigator® has powerful boot capabilities and is forensically sound to empower your frontline investigators: