An increasing number of investigations in the United Kingdom involves financial transactions using Revolut. The company claims the Revolut app is "The UK's fastest growing financial super app" and it is now available in the United States. 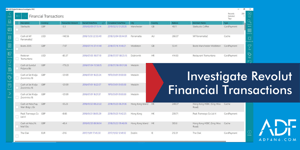 The financial app lets users "Exchange, send and receive 28 currencies in seconds" and the company states they have more than 10 million customers around the world.

ADF has introduced the ability to quickly collect and analyze Revolut financial transactions in iOS with a new financial table in Mobile Device Investigator and ADF PRO forensic tools.

This capability gives digital forensic investigators the ability to uncover digital evidence related to financial crimes and tie transactions to user actions. The robust capabilities of ADF forensic software empowers field investigators to uncover fincrime starting at the scene of the crime.

Revolut lets users open multi-currency accounts in just a few minutes without a credit check. Users simply make a deposit as small as $20 and can then send and receive dozens of currencies including USD, EUR, CAD and MXN.

According to the International Compliance Association, "there are seven groups of people who commit the various types of financial crime:

ADF mobile phone forensic software is designed for investigators to leverage the power of Artificial Intelligence (AI) and Machine Learning (ML) to quickly and easily collect evidence from iOS and Android phones and tablets.