What is the Role of a Digital Media Investigator? 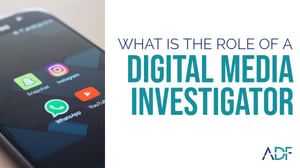 Due to an increase in crimes involving the use of computers and cell phones, there is a growing need for Digital Media Investigators, sometimes referred to as DMIs. They have an important role to play in police investigations and that role is becoming more critical with the proliferation of digital data.

Digital media investigators do more than just sit in a lab looking at hard drives. They are often digital first responders and go out into the field with other law enforcement agents to investigate crimes first hand and offer advice on how to gather digital evidence at a crime scene. Collecting, analyzing and reporting on digital evidence to be used to prosecute and convict criminals is a vital role for DMIs in the United Kingdom and elsewhere.

Investigating crimes online is also part of the job. As part of the Digital Media Investigation Unit (DMIU), digital media investigators are now being employed to investigate online child sexual abuse cases. Not only do they seek out individuals who traffic in child exploitation (CE) or indecent images, but they also pursue individuals who view the images or seek to groom children using apps, social media or online interactions. Without a digital media investigator, bringing child predators to justice would be next to impossible, especially in an era where forensic backlogs are commonplace.

The evidence DMIs gather can include phone records, payment transactions, computer documents, internet history, email, text, social media and much more. Digital media investigators can even use cell phones to document the location a suspect was in when they used social media. The evidence collected can be used in court to help prosecutors reach a conviction or by defense attorneys to prove a suspect's innocence.

In addition to using the Internet, computers, tablets and cell phones to investigate crimes, these police investigators use the best of breed digital forensic software to solve crimes. They need to be well versed in the most advanced technology so that they can file reports and solve cases quickly.