What is CAID: The Child Abuse Image Database in the UK

In 2012 the UK’s Operation Yewtree commenced. The operation started as an investigation by the Metropolitan Police Service into sexual abuse allegations, primarily on the abuse of children. It swiftly became a full criminal investigation that led to what is called the “Yewtree effect”, which is credited with an increase in the number of reported sex crimes in the UK. Between that time and 2017 in the UK there were nearly 70,000 child sexual abuse offences. This number, sadly, is up 24% from prior years. 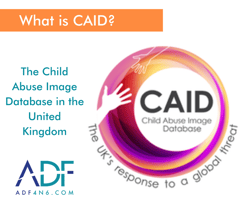 Technologically savvy, CAID has the tools for facial, object, and relationship mapping. Through the use of CAID, UK Law Enforcement works collaboratively and is able to streamline forensic reports.

In the fight against such abuses, CAID is a necessary tool. It works by bringing together all of the images that both the police and the National Crime Agency encounter, and uses their unique identifiers (hashes) and metadata to improve investigations. Digital forensic tools like ADF software collect and analyze hash data such as that CAID provides to create readily made reports for prosecutors to assist in child exploitation cases.

CAID was created in conjunction with the police, industry partners, and alongside British Small and Medium Sized Enterprises (SMEs) in 2014. Since then, CAID has helped streamline investigations and prosecution of offenders. CAID hashes are used in forensic triage for early assessment to help police prioritize which of the suspect’s devices require further analysis.

ADF Software works internationally with both Project VIC and CAID hashes to triage on-site, speeding investigations and helping prosecutors get perpetrators off the streets as soon as possible.