What is CEM? Terminology, Law, and Technology in Australia

Important facts about CEM include: 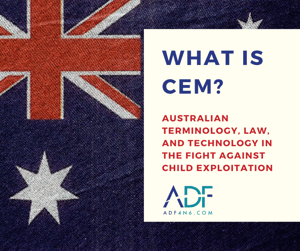 Australian states and territories follow Commonwealth legislation against this kind of material, including offences of exploitation using services such as the Internet. Offences in the Australian Criminal Code can include sexual activity that occurs remotely, such as causing a child to engage in sexual activity or even using live webcam or peer-to-peer networks. According to a 2011 study by Wolak, Finkelhor, and Mitchell, peer-to-peer users possessed larger quantities of CEM images and videos including more extreme forms than those who did not use peer-to-peer networks.

An area of importance when working with CEM is classification and identification of these materials. In Australia, there have been attempts to classify this material that sits under the umbrella of CEM.

Some agencies use the Oliver scale, while others rely on the Combating Paedophile Information Networks in Europe (COPINE) scale. In New South Wales, the Child Pornography Working Party recommended the usage of a single classification system which utilizes the Microsoft Child Exploitation Tracking System (CETS) and uses the Australian National Victim Image Library (ANVIL). The Australian Federal Police, police departments of Queensland, Victoria, and the Northern Territory now use the CETS/ANVIL system.

The creation, use, downloading, and sharing of CEM is not a victimless crime. Real children are harmed and the repeated circulation of CEM continues their victimization. According to the Queensland Sentencing Advisory Council, “CEM is an international crime with a local footprint”. This requires both national and international cooperation including classification language that can be used nationally and globally. This is where exciting innovators like Project VIC International come in.

Delays are often associated with CEM cases due to the lengthy work period that occurs between charging an offender and proceeding to a committal hearing. During this time, investigators and examiners are completing complex forensics work to classify and detect CEM.

Forensic triage tools can be used to speed CEM investigations by allowing your officers to complete scans on-scene with the use of custom search profiles created in the lab by examiners. With the combined power of Digital Evidence InvestigatorⓇ and Triage-InvestigatorⓇ in our Field InvestigatorTM for Teams, examiners can maintain control in the lab while investigators rapidly collect, analyze, and report on data on-scene. Reduce your forensic backlog with the use of digital forensic triage!