Putting Victims First. That’s the message that Richard W. Brown, the CEO of Project VIC International impressed upon me when I had the opportunity to speak to him about how and why he helped found the non-profit organization which helps law enforcement agencies around the world fight child exploitation.

Project VIC is victim-centric. After 25 years with the New Jersey State Police, Rich has been at the front lines of helping redefine the way law enforcement looks at the justice system. “Law enforcement has traditionally been offender-focused” Rich says. “One of our taglines is victim first; We were able to make some changes with the Department of Justice in how they collected information to make it victim-focused rather than stats-oriented. Now the questions being asked are ‘How many victims did you save?’ rather than ‘How many suspects did you arrest?’. Between that and ‘no victim left in the evidence room’, that’s how we talk.” 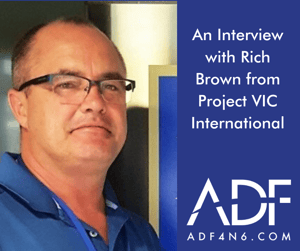 Having spent time as a school psychologist, I am keenly aware of the issues surrounding child exploitation so I was grateful for the opportunity to talk to Rich about his experiences and his current role helping protect children through his work which combines outreach, knowledge of policing, and technology. The first thing I did was ask Rich how he came up with the concept of Project VIC and what challenges he faced getting the nonprofit off of the ground. I’ll admit that I am still learning every day about the amazing work ADF partners do every day, and Rich took the time to explain what inspired him to found and grow Project VIC.

“I’ve always been interested in technology going back to my time as a detective in the Electronic Surveillance Unit. The experiences I had there inspired me to further my education in technology.” Rich didn’t list out his degrees, but for our readers who are looking to learn more about technology and digital forensics, it’s interesting to note that he received three degrees from Farleigh Dickinson University -- a Bachelors, Masters] , and additional Masters Certificates all in the subjects of technology, network security and digital forensics.

The Launch of PhotoDNA

“When Microsoft and Dartmouth College launched PhotoDNA I was inspired. It was revolutionary at the time law enforcement immediately realized how this powerful technology that aids law enforcement in finding and removing known images of child exploitation could be used around the world to help detect, disrupt and identify Child Sexual Abuse Material (CSAM).”

According to Microsoft, “PhotoDNA creates a unique digital signature (known as a hash)  of an image which is then compared against sigues (hashes) of other photos to find copies of the same image.” Rich stated “PhotoDNA provided a different type of hashing; instead of relying on MD5 and Binary Hashing, Microsoft’s new technology allowed for what is called fuzzy hashing.”

For those who needed an explanation (like I did!), fuzzy hashing, allows for clustering of images together that are visual duplicates. While the naked eye would not be able to see the difference, PhotoDNA recognizes each photo’s individualities. This technology means that all those photos that looked the same but had different signatures, or those that were stacked images (like a deck of cards) could be run through a tight enough algorithm to differentiate them.

Rich explains why this was so unique. “In the past, all images used by law enforcement were not shared, but were stockpiled within different agencies and departments.” Rich’s idea with Project VIC was to create a data model that would include the PhotoDNA hash, the media record, the MD5 and Binary Hashes, and most importantly -- share this data between law enforcement all over the world.

Project VIC came up with a classification system based off of Title 18 of the United States criminal code and began to tag images. Alongside NCMEC - the National Center for Missing and Exploited Children - and along with agencies such as Interpol, law enforcement could suddenly concentrate on new images, identify victims who were already rescued and determine if they’d seen the image before. The database is known as the VICS database and it is a data model which has become a standardized model for exchanging information from digital forensic tools and technology services specializing in the fight against child abuse.

The Importance of Officer Wellness in Relation to CSAM

As a result, there is a large element of wellness to Project VIC’s work; mental health of examiners is prioritized so they can use hashing and classifiers to further sift and protect the officer from un-needed exposure when possible . As part of this interview, I got to hear about exciting new technology by Project VIC called Safer Viewing. “This technology can, real-time, as the investigator or reviewer has to look at these images, blur or block the genitalia to their discretion using very specific artificial intelligence.” This tool has been under construction for over a year and will no doubt contribute greatly to officer and examiner wellness.

“The mission has evolved in the U.S. and is now reaching out to other countries and developing countries to help them build their database of hashes in the same way. We are looking for countries that don’t necessarily have strong image repositories and are helping them as subject matter experts.” states Rich. “Our goal is to guide governments toward ideas of how to build organized structures of image repositories that can be used in the future for AI and machine learning.”

While this work can be very specific to each individual country, Project VIC is confident in each country’s ability to build up a repository. Now Project VIC’s focus is to look at different algorithms that will help specific regions of countries do their jobs where they may not currently have that ability. “As an NGO (non-governmental organization), we can bring people together to start that discussion between lawmakers, prosecutors, police, managers, and more. We can concentrate on how to create country-specific models that will help people do their jobs.”

Because I came from such a different background before working with ADF, I was curious to learn more about how Rich’s background prepared him for leading this international fight against Internet crimes against children. Rich explained that he leveraged his experience in a centralized intelligence program where he saw what data  wasn’t being used, where it was being misused, and where participation was lacking. He then tailored his approach from a centralized to a decentralized system with connections to each other that built trust across agencies.

Rich saw that those who were passionate about their projects would volunteer their time, and that dramatically informed his practice for Project VIC going forward: “We made this as a grassroots effort - not government sponsored or funded, just people that wanted to be there and do it. That’s what made Project VIC successful.”

As a result, Project VIC has done work that makes Rich proud. When asked what his favorite case was, Rich said that there were too many successes to celebrate just one. “One example was a group of police officers that said they were executing a search warrant and arresting someone for the possession of an image; with Project VIC’s workflows and methods they found that the suspect was also abusing someone two blocks away, and they were able to rescue that child.” In another example, as Project VIC went international, they trained a group in Argentina. According to Rich, “Not only did the agency arrest someone, but they broke a multi-country crime ring. Project VIC is truly an international effort.”

ADF Solutions is proud to support Rich and Project VIC’s work. ICAC Task Forces, High Tech Crime Units and law enforcement teams around the world use Project VIC hashes every day in ADF's digital forensic image recognition and classification triage software. We help law enforcement bring the fight against child exploitation to front line field agents so they can quickly identify victims and make on-scene arrest decisions. Thanks to the great work of Project VIC International  under Rich’s leadership, we have faith this fight will win. Thank you so much to Rich for his time in speaking with us and sharing more about Project VIC!