The ICAC Task Force program was started in 1998 by the U.S. Department of Justice to help law enforcement agencies learn how to investigate, prevent, and combat Internet Crimes Against Children or ICAC. It was developed due to the increasing number of children and teens using the internet and technology, the availability of child sexual abuse images online, and the heightened online activity of predators seeking contact with underaged victims.

ICAC comprises 61 task forces representing over 5,400 federal, state, and local law enforcement and prosecutorial agencies. In 2020 more than 21.7 million reports of suspected child sexual exploitation were made to National Center for Missing & Exploited Children (NCMEC) CyberTipline [1]. There has been a rise in reports of online enticement to the CyberTipline. In the year 2020, the rate of online incidents increased by 95.7% compared to the previous year [1].

Online enticement occurs when an individual attempts contact with a child via the internet to commit a sexual offense or abduction. This often occurs across various platforms, including social media, messaging apps, gaming platforms, etc. Actions such as grooming for sexually explicit images or in-person meetings, sexual conversations, or selling child sexual abuse materials (CSAM) are common [1]. Children are lured into these different forms of child pornography and can often be exploited by predators for monetary gains. 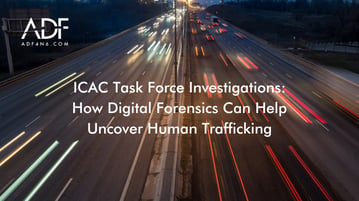 Investigators have been able to leverage automated technology to speed their investigations. Automated digital forensic software gives users the ability to collect vast amounts of data in a shorter time frame. The data can also be sorted automatically according to tailored preferences. Investigators can focus their search based on their current case, generating actionable digital evidence. With digital forensic software, investigators can also obtain data from electronic devices. This can include images and videos, emails, contacts, messages, browser histories, and more.

Improved features such as facial analytics detect infants, toddlers, children, and adults in images. Facial analytics speeds up investigations by sorting through large amounts of data from a mobile device and producing images that contain these child victims. Not only does it reduce the amount of time it takes an investigator to find all of these images in mass data but it also protects investigators from being repeatedly exposed to disturbing content. As technology continues to improve digital forensic software continues to be adapted and improved to remain useful in human trafficking investigations.

ADF has been supporting the ICAC community since 2004 and has attended numerous ICAC conferences. ADF’s Mobile Device Investigator leverages the power of Artificial Intelligence (AI) and Machine Learning (ML) to quickly and easily collect evidence from iOS and Android phones and tablets. It is designed to be operated by front-line police, sheriffs, field agents, and investigators.

Users can connect a suspect device via a USB port to quickly collect evidence and perform a fast logical acquisition of up to 4GB of data per minute. Mobile forensic tools allow for smartphone triage and empower field agents to collect witness and suspect evidence on-scene. Human trafficking cases are time sensitive and require immediate action to help save victims. ADF’s software supports this goal with the right tools for the fight against CSAM and human trafficking.