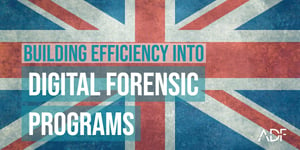 Technology has become more powerful and portable, allowing a more significant amount of information to be created, stored, and accessed. This shift in the information technology landscape (mobile, cloud, IoT, etc.) has made the collection and analysis of digital evidence a critical factor in investigating and solving virtually all types of crimes.

There are serious Internet related crimes, that need to be investigated quickly, child exploitation related offenses for instance. For example, in the United Kingdom, the National Crime Agency recently estimated that about 140,000 out of nearly 3 million registered dark web accounts registered on child abuse sites are UK-based.

Governments need to fund digital forensics to empower investigators and forensic examiners and grow their capabilities in response to the proliferation of digital crime. The Director General of National Crime Agency (NCA) in the United Kingdom, for instance, recently asked for an extra funding boost of £2.7 billion for the next three years to keep up with the changes in serious and organized crime. If approved, the agency would receive an additional £650 million per year, doubling its budget for 2019/20.

While every agency can benefit from increased funding, it is also important (and perhaps especially for those agencies that are under funded) to also adopt a more efficient and effective methodology of processing digital evidence.  One of the most effective methods for improving digital forensic workflows is to develop an Early Case Assessment (ECA) methodology which leverages forensic triage at the forefront of investigations.

As agencies adopt easy to use forensic tools, such as Mobile Device Investigator™ and Digital Evidence Investigator® for triage and the initial collection and analysis of volatile memory (RAM Capture) and critical evidence, front-line agents will be able to make on-scene decisions faster.  Making decisions at the scene helps officers improve their interactions with witnesses and victims while they quickly identify suspects and capture valuable data.

In the United Kingdom, serious and organized crime affects citizens more than any other security threat costing the country more than £37 billion a year, which is equivalent to about £2,000 per family. The offenders of organized crimes are indiscriminate, and they do not care about the crime they get involved in as long as they are making a profit.

Any authorized organization can contact us to request a free trial of ADF digital forensic software for computers, electronic devices or iOS and Android smartphones and tablets.