Child sexual exploitation and modern slavery are related aspects of human trafficking which result in the commercial exploitation of children and often being victims of Child Sexual Abuse Material creation as well. 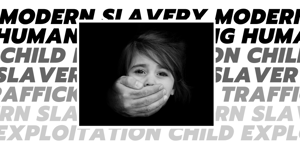 Children who are victims of human trafficking and modern slavery are often subject to physical and emotional abuse and neglect. Traffickers exert control by inflicting emotional, physical and even sexual abuse of children that can be forced into illegal forms of labor and slavery-like conditions.

How do children become victims of the modern slavery industry?

While there are many ways this happens, the UK’s National Society for the Prevention of Cruelty to Children states, “Traffickers often groom children, families and communities to gain their trust. They may also threaten families with violence or threats. Traffickers often promise children and families that they'll have a better future elsewhere.”

Child trafficking is an economic crime

Poverty plays a factor when a parent believes they can profit from their child. They may not realize that their child is being exploited for forced labor (agriculture, domestic work, drug trade, etc). Likewise, traffickers and organized crime syndicates can force or trick families into allowing their children to be exploited, sometimes to pay off a debt owed to the traffickers.

Most parents don’t willingly give their kids away to be victims of trafficking or exploitation. Criminals make false claims to parents that this is all a means to an end and the child will be safe. The worst part about this is that in most situations, children look to their parents for advice and wisdom, and they expect them to protect them.

According to the National Center on Safe Supportive Learning Environments, child labor trafficking often “occurs in the context of domestic service, agricultural work, peddling, and hospitality industries (e.g., restaurants and hotels).” while Commercial Sexual Exploitation of Children (CSEC) refers to various activities and crimes “involving the sexual abuse or exploitation of a child for the financial benefit of any person” according to the US Office of Juvenile Justice and Delinquency Prevention.

Both Justice and Social Issues

These issues are not just criminal justice issues, they are social issues that require the work of families, communities and law enforcement internationally. Many countries exchange information through joint law enforcement efforts or via Interpol which manages an International Child Sexual Exploitation (ICSE) database to help investigators make connections between victims, abusers and locations.

In the United States, the Department of Justice funds more than ICAC Task Forces that track down CyberTips from NCMEC and investigate child exploitation cases.

Solving crimes against children is a daunting task, especially with the rise in cybercrime and the sophistication of criminals that continue to exploit children. Online enticement of children is a serious and growing issue with an increase in online enticement attempts up over 230% in a four year period. To help police and prosecutors, ADF has developed digital forensic image recognition and classification software for mobile and computer forensic investigations. Field forensic software such as Mobile Device Investigator empowers law enforcement to solve crimes against children fast starting on-scene.