ADF Solutions sponsored this first event of its kind which 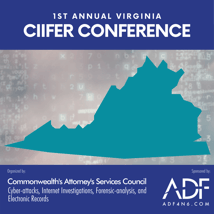 was kicked off by JMU President Jonathan Alger who welcomed the attendees after an introduction by Robert Kolvoord, Dean of the College of Integrated Science and Engineering (CISE). President Alger talked about the work James Madison is doing to prepare the next generation of cybersecurity professionals with new academic programs that respond to emerging needs and an increased emphasis on interdisciplinary thinking and problem-solving -  something that is reinforced with ethical perspectives and reasoning in action in the university’s Cyber Intelligence Certificate.

ADF’s conference presentation focused on the power of ADF computer triage to uncover digital evidence for prosecutors and law enforcement. ADF mobile and computer software empowers police investigators, sheriffs and digital forensic experts throughout the Commonwealth of Virginia as well as federal investigators from a wide variety of federal agencies who support cross-functional cybercrime task forces including the Internet Crimes Against Children Task Forces that operate in Virginia. CIIFER is organized by the Commonwealth’s Attorney’s Services Council.